Join the two cracking speakers in Rob Miles and Steve Spencer as they talk about Air Quality and Spider Eggs as well as opening doors with the ESP8266.

Good quality air is important. After all, everyone breathes. But dig a little deeper into the subject and most of what you find is what we don’t know. Is air pollution produced by local traffic? Does it waft in on the breeze? Are there times when I really shouldn’t go out for a run?

In this talk I’ll describe how you can build your own connected air quality sensor and get data from it. I’ll touch on embedded devices the MQTT protocol, LoRa networking, Azure IoT Hub and Azure Functions, along with our Connected Humber effort to spread sensors over Humberside. And I’ll even mention spider eggs and show off my “Air Quality Top Hat”.

Using a cheap low powered ESP8266 and micropython, we connect to the Azure IoT hub to send and receive messages. The solution integrates with Azure Functions and Cognitive services and uses face recognition to unlock a door. This presentation is about the easy way to integrate these components together along with Service bus to provide a serverless solution. There will be a door and it will get unlocked.

Please note. Neither the speaker nor the Nottingham IoT Meetup are responsible for any damage to any components or hardware you may bring along.

Note also that the equipment at the event remains the property of the speaker(s), and is for demo purposes only. 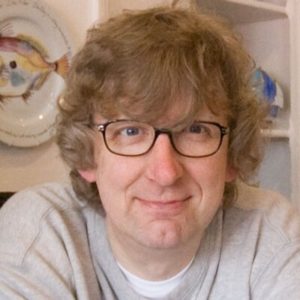 Rob Miles has spent over 30 years teaching programming to a succession of students at the University of Hull in the UK. He’s a Microsoft MVP with a passion for programming, C# and creating new things. He’s written a few books over the years, and coloured in a lot more.

If he had any spare time he’d spend it writing even more code. He loves making programs and then running them to see what happens. He reckons that programming is the most creative thing you can learn how to do.

Having worked with many languages and platforms over the years he now likes nothing more than writing C# using Visual Studio, preferably for a small device of some kind. If there are motors and lights involved, so much the better.

He claims to know a lot of really good jokes, but nobody has ever heard him tell one.

Steve is an experienced .NET Developer, Microsoft Azure MVP and a Freelance Developer/Architect based in the Midlands (https://t.co/0aQwPXJzbs).

Where will we be meeting:

Due to the ongoing pandemic, we’ll now be holding our meetings on Zoom.

We’ll be kicking off at 18:30 for an open networking chat on Zoom, before kicking our talk off at 7PM.

You can join the Zoom Meeting by simply going to the following URL & following the Prompts;

We’ll be password protecting the meetup to help prevent “ZoomBombing”. We’ll be sending out an email to people that have RSVP’d around 5.30pm UK Time on the day, so make sure to check your emails!

Before that, do feel free to head over to https://zoom.us & create yourself an account as well as downloading the client to your favourite machine!

We’re proud to partner with Jetbrains, who are kindly offerring one lucky attendee a 1 year subscription to a JetBrains product of your choice, including Resharper, IntelliJ and PHPStorm.

Attend and tweet on the #NottsIoT hashtag to be in with a chance of winning!

Notts IoT are on the lookout for a full time Headline Sponsor… If you or anyone you know would be interested, please do get in touch!
Join the Meetup Here